Delta Sigma Theta Sorority, Inc. is a private, non-profit organization whose purpose is to provide assistance and support through established programs in local communities throughout the world.

Delta Sigma Theta Sorority, Inc. was founded on January 13, 1913 by twenty-two collegiate women at Howard University, the Sorority is currently a sisterhood of more than 250,000 predominately Black college-educated women.

This includes 1,000 collegiate and alumnae chapters located in the United States, Canada, England, Japan (Tokyo and Okinawa), Germany, the Virgin Islands, Bermuda, the Bahamas and the Republic of Korea.

The major programs of the sorority are based upon the organization’s Five-Point Programmatic Thrust: 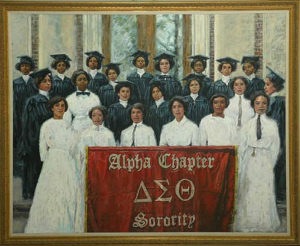 Join us March 7, 2020 at 8:00 a.m. as we walk together to fight against heart disease and stroke. By participating in the 2020 Heart Walk, you’re joining a million Heart Walk Heroes from across the nation to raise funds for lifesaving science. Science that can teach us all how to live longer and be Healthy! Register and Walk with Us! #2020HeartWalk #HealthyHeart♥️ #PMH #TACDST #TAC1950

Share on FacebookShare on TwitterShare on Linked InShare by Email